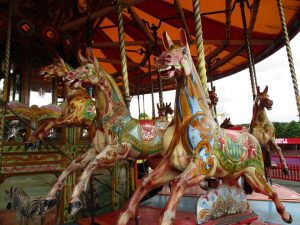 The invitation to join a writers day at Beamish with their writer in residence Becci, came through on a tweet from Mslexia magazine. I signed up immediately and was one of a handful of writers on a sunny Tuesday in July who met in the museum café. After introductions we went in twos and threes to explore various parts of the site. My first area to visit was the Fairground and Railway, which had yet to be invaded by the mass of visitors I’d passed on my way into the museum. As the carousel was steaming up, there was an eerie calm to the Fairground. Short story ideas came thick and fast and my mind is still whirring, wondering which direction to take this inspiration and make it work best.  Becci gave us some prompts to think about when visiting each area and these were very useful. After the Fairground, a visit to the Railway again inspired all kinds of different short story ideas, and one possible large non-fiction project which I’m going to investigate fully.

It was time for lunch and a catch up with the rest of the group in the Resource Centre. We found out about each other’s work, families, tastes in sandwiches. And then the magic happened. We were taken on a behind-the-scenes tour, to places that the public don’t see, into the archives and collections. And just when I thought the magic couldn’t get any better, it did. We went into the costume department and were given a talk from the costumier, a lovely woman with a wonderful turn of phrase. My notebook was filling up with some fantastic material about, er, material.

It was time to head off to a second part of the site and I wandered down to Pockerley Village and then into the Town. With tourists and visitors now filling the site, I found it harder to get into the head space needed to take notes and immerse myself in the sights and smells and sounds of what was going on around me. And so I walked… I walked around the site, taking as much in as I could. The trams, the trains, the sheep. I closed my eyes, I breathed in the fresh air, I opened my eyes, I made notes.

At the end of the day we met again as a group in the Resource Centre for a chat and a debrief with Becci. Everyone said how fantastic the day had been. We’d made new friends, we’d even… and I hate this word.. we’d networked. Email addresses will be swapped, URLs will be Googled. I can’t wait to get back next week for day 2 of what I already know will bring a smile to my heart and pages scribbled full of writing inspiration to my notebook.

I’ve visited Beamish Museum a few times in the past, but never before have I seen it with my “writer’s head” on. It’s going to affect – for the better – how I view almost everything now!

Hello! I’m a writer, blogger & creative producer (theatre) based in Gateshead. I really hope you enjoy reading my blog and do get in touch if you have any questions or comments!

Favourite exhibit at Beamish: Rowley station – Especially when the weather’s nice, it’s so peaceful and I could spend a long time just sat on the platform!

I can’t visit the museum without… A trip to the bakery! Especially if they’ve been making iced buns.

Favourite time period: Before working at Beamish I wouldn’t have been able to answer this but working on Remaking Beamish has given me a real insight into the 1950s and it seems like such an exciting time period, I would have loved to experience it (though maybe not all the housework!)

Other interests: I’m a huge foodie, with a ridiculous collection of cookbooks and an unhealthy obsession with Masterchef!